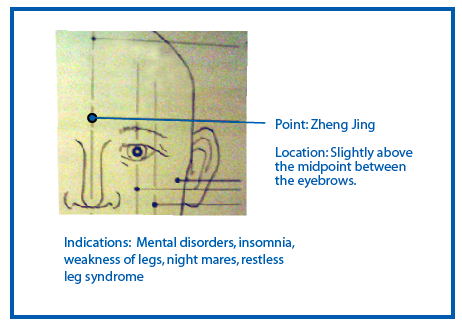 Restless leg syndrome is a very uncomfortable feeling that travels down the legs and makes one need to move or massage the legs in order to stop the uncomfortable feeling. It typically occurs at night while sleeping due to this it can be considered a sleep disorder and it is also believed to be an issue related to the central nervous system.

Most common causes are:
1. Injury to the central nervous system
2. Injury to the Spine
3. Chronic Diseases
4. Certain Medications, particularly antidepressants

Due to its occurrence while at night trying to rest it can also be considered a Shen disturbance, which in chinese typically means mind or spirit. So restless leg syndrome is both a mind and body disturbance.

In acupuncture, points on the midline of the head are directly related to the brain and central nervous system and commonly used to treat motor impairments related to the spine and extremities. Coincidentally the points on the face and top of the head are also used to calm ones Shen, to induce a relaxing state of mind. In general these Shen points are great additional points that can be used during acupuncture treatments to help people relax and get more out of the treatment.

There is one acupuncture point in particular, which comes from Tung style acupuncture that has shown clinical effectiveness in treating restless leg syndrome. This point is called Zheng Jing, which translates to Tranquil and Still. It is just slightly above the midpoint of the eyebrows in the center line of the face, and slightly above another very popular acupuncture point used to calm the mind called Yin Tang.

Both these points can be needled simultaneously, which can have a very positive relaxing effect over both the mind and body. When Zheng Jing is needled, manipulation on the central nervous system occurs, which brings reduced feelings of discomfort in the legs and an easier time trying to relax at night.

Performing acupuncture on this point is a very powerful means of stimulation, but using massage by rubbing the area for a few minutes multiple times a day can also be helpful for reducing the discomfort of restless leg syndrome. It should always be kept in mind that the longer an issue has been around the more treatments will be needed to over come it.

I hope this article has been helpful, please leave any comments or questions below. You can also visit my website at Pansomaacu.com