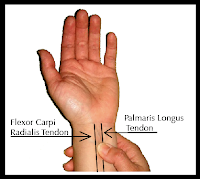 "Natural forces within us are the true healers of disease."
-Hippocrates

Nauseous? Feeling nervous, maybe a little stress in the chest? Perhaps having some trouble taking a deep breath. There is a nifty little wrist band out there that can take care of that for you, especially useful for those who don’t want to take any type of medication to get over the issue.

Its called a sea band, based off of the principles of acupressure, its an elastic wrist band that has a tiny plastic nub attached to it that applies pressure into the skin over a specific point. The band is made specifically to be applied over an acupuncture point called Pericardium 6 or Inner Pass. This point is on a channel that connects to the hearts pericardium, a protective covering for the heart. This part of the body is in the chest area and lies above the diaphragm, which assists in breathing; the diaphragm is also above the stomach and liver. The heart, the diaphragm, stomach and liver are all closely connected, and the Inner Pass point is a direct connection to them all. Pressure on this point relaxes and stimulates all of the above organs.

When a feeling of nausea, vomiting, stress or trouble breathing arises due to pregnancy, frustration, airplane rides, riding in a car or of course being on a boat. Applying pressure to this point with the help of the sea band can make a world of difference.  Keep in mind that a change won’t take place right away, but after 5- 15 minutes relief should be felt.  For a more effective result a sea band should be worn on both wrists. You can wear it as long as you want, the pressure applied may cause some external discomfort after a while, but you can move it up or down slightly if you don’t want to remove it. Also, no side affects should occur, its like a constant massage pinpointed to the inside of the wrist.

The point specifically lies between two tendons above your wrist crease and two thumbs width up, the tendons are Palmaris Longus and Flexor Carpi Radialis. Not every one actually has the tendon Palmaris Longus, matter of fact 20% of the population does not have this tendon.  In this case the point lies inside(medial) to the Flexor Carpi Radialis tendon.

In my opinion this band is perfect to use on other acupuncture points on the body as well. For instance if you place the band on the Inner Pass point and turn it around 180 degrees to the exact opposite side of the forearm. The plastic nub will apply pressure to a point called Triple Heater 5 or the Outer Pass. This point is good for migraines, earaches and stiffness on the lateral sides of the neck.

For more information on the Sea Band and how to get it I recommend going to their website http://www.sea-band.com/ .  I hope this has been a useful read for you, I hope you have a wonderful day. Please leave any comments or questions, thank you!
Posted by acuthink at 10:50 AM