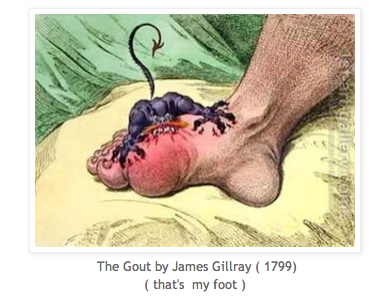 Gout is a form of arthritis and appears as a red inflamed bump over a joint, which causes very sharp pain. It is considered to be one of the most painful diseases and it usually wakes people up in the middle of the night in excruciating pain. Pain so bad that artist James Gillray in the year 1799 painted how painful it can be by depicting a little demon biting a foot!


Gout is strictly a diet related issue and was once known as the disease of kings, because at one point in history it was only royalty who could afford to eat rich foods on a regular basis. Rich foods being considered mostly as smoked meats and alcohol. Now in todays conventional world those rich foods are cheap and in abundance for anyone that wants it, because of this gout is making a come back.

Purines are the reason why gout occurs and hurts so much, all foods have some amount of purines in them, but some have very high levels of them. Purines are natural to the body and are broken down to create uric acid, which is actually a helpful antioxidant. Although when to many purines are broken down, then a lot of uric acid is made, which can lead to uric acid crystals. These crystals build up and create painful gout usually in a specific joint on the body.

The following list of foods are high in purines and should not be eaten in excess on a regular basis to avoid getting gout:

According to chinese acupuncture theory, the place where gout appears on the body also tells what internal organ or organs is suffering the most from the diet.

More times then not gout appears on the outside of the joint of the big toe, this area is more affected by gout then any other joint on the body. This area is affected the most because it is directly connected to the spleen organ system, which in chinese medicine helps digestion. It also helps all other digestive organs that breakdown food for the rest of the body and it is very susceptible to dampness or foods that can really weigh down the system.

So when it comes to treating gout with acupuncture, you look at the related organ system that is being affected and the main issue, which is severe sharp pain. Sharp pain in chinese medicine literally indicates blood stagnation. So the treatment for gout would be two parts.

1. Strongly moving blood out of the affected joint, which would have to be done by bloodletting the area on or around the gout. This is typically done by taking a lancet and quickly pricking an acupuncture point located next to the gout letting out a handful of drops of blood. This technique can be done multiple times and has been shown to offer a lot of relief for those who suffer from gout.

2. Boosting the digestive system would have to be done to help the body breakdown left over uric acid. This would be done by selecting specific acupuncture points and stimulating them with acupuncture needles and or heat therapy. Also, a permanet change in diet would be recommended by the acupuncturist to avoid getting gout again in the future.

So prevention is always best, and eating more veggies then meats can keep the body healthy and less prone to disease like gout. I hope this article has been informative and if you have any comments or questions please them below and thank you for visiting Acuthink today!